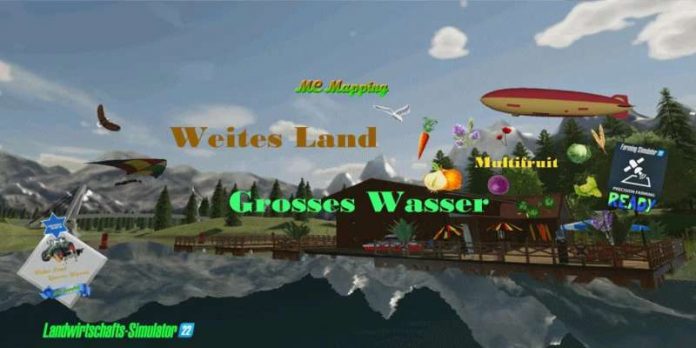 Weites Land Grosses Wasser v1.0 FS22
A fictitious 4x map with many many animations and productions.
Hello dear LS22 friends
The time has come.
After several months of construction, I finally managed to finish my map and present it to you.
There are far more than 20 productions, many animated objects and much more on the map.
See below for more information.
Late stage grass is initially only available in the yard and up to the road.
On the rest of the map it is in medium growth phase.
Not all of the buildings have snow on their roofs.
You would have to have more time for this, which I unfortunately cannot muster and be familiar with certain software.
I don’t think that detracts from the game though.
I would like to thank the Rheinlandpfalz / Markus team for releasing the fruit types and their textures.
The ground angles have been increased to 32 for better field cultivation.
Unfortunately, I could not find out the creator or builder of a helicopter that I found on the net,
nevertheless, I would like to thank you very much for this and if that is not desired,
Then of course I’ll remove it.
There are 20 MC_Coins (€8000 reward each) placed on the map that you need to find and finish
With the 20 MC coin you can expect another reward of €100,000.
Fields:
38 in total, not a lot, but the possibility to create many more.
Several open spaces are available for further productions or courtyards.
Information about the map can be found on 2 buyable boards which can be placed.
Found in the Decorations/Miscellaneous build menu.
Also I have 2 fountains to buy for 200€ each daily cost 0€ (but free water)
as well as a washing area 200 € Daily costs 5 € created and installed.
Found in the Buildings/Tools build menu.
You can also purchase a farm petrol station for €23,500, the daily cost is €7.
Another vehicle hall can be found in the store for €32,500. Daily costs are €15.
More objects were added.
Just see for yourself :
The map is prepared for Precision Farming DLC
Information:
Attachments for the Precision Farming DLC ​​can be found in the game under Equipment/Miscellaneous.
I have also installed 10 additional landscaping textures which are named earth, mixed forest, cobblestones, beach sand,
Concrete, Gravel, Dirty Gravel, Sidewalk, Gravel Sidewalk and Riverbed some of which are from the USMap.
Other fruits:
Carrots, onions, lavender, alfalfa, rye, red cabbage, white cabbage, poppy seeds, hops and clover.
The map contains self-created storage facilities, which you can find in the construction menu under Silos.
Here you can store:
Carrots, onions, potatoes, sugar beet, sugar beet pulp, red cabbage, white cabbage, sugar cane, hops,
Chopped material, grass, hay, straw, silage, compost, fodder, manure, pig feed, wood chips and compound feed.
There are 4 camps available and cost €22450 per camp. Daily costs are €17.
All MC mapping objects are sellable.
However, warehouses should be cleared beforehand.
In the game’s own fruit silos you can store:
Wheat, barley, oats, canola, sunflower, soybeans, corn, sorghum, lavender, poppy, rye and malt.
More warehouses such as liquid fertilizer warehouse, herbicide warehouse, fertilizer warehouse, lime warehouse and seed warehouse have been built and added, which can be purchased in the shop.
Finally, there are also other game storage options.
Productions:
Various types of fruit, bakery production, beer brewery, various juice production, diesel production, ice production,
Barrel Manufacturing, Pallet Manufacturing, Cardboard Manufacturing, Potato Products, Clothing/Cloth Manufacturing, Charcoal Manufacturing,
Malt production, flour production, dairy products, furniture production, pellet production, red cabbage as well as white cabbage production,
Rum and whiskey production, 2 sawmills, firewood production, slaughterhouse, tobacco production, sugar production,
Cigarette Manufacturing and some more.
Animated objects:
Eagles, seagulls, fish, ducks, crabs, helicopters, zeppelins, passenger planes, sailing boats, motor yachts, ships, paragliders, hot air balloons and more.
Mods needed
1. FS22_A_ProductionRevamp will be automatically downloaded in game if you confirm with Yes.
Lasts a few seconds.
Go back, wait and start again.
– Production Revamp
Recommended mods
1. FS22_MoreTrees
(This script increases the tree limit (trees that can be planted on a map).
There are many other nice mod which can beautify the map.
Here just to name a few.
1. FS22_DecorativeRocks,
2. FS22_decoStones
3. FS22_FlowersPack,
4.FS22_Goldcrest_Decoration_Pack,
5. FS22_landscapingDE
…and many many more.
Optional mods
1. Beet pulp plant
Log is free of errors.
Well, way too much written.
And now I wish you good luck and have fun with the map.