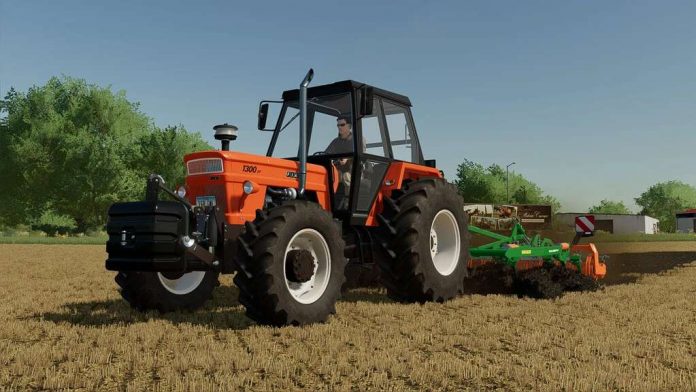 Fiat 1300DT Rebuild v1.0 FS22
Horsepower: 132HP-185HP
Cylinder: 6 Cyl 7.4l displacement
Base Price: $24000
Year Built: 1973
The Fiat 1300 was the biggest tractor of the Fiat Nastro d’Oro Series when it was first introduced in 1973.
Until it got replaced by the Fiat 1300 Super in 1976 its huge OM 7.4l naturally aspirated engine made 132hp at 2100rpm.
Its certainly one legend of a mighty tractor.
In comparison to the default Fiat 1300dt the following was changed:
– front axle / track width widened so it matches the rear one
– realistically possible wheel configurations for all matching brands (and there are quite a few wheel configs and combinations)
– frame and engine color changed to brown like the original, not grey (also optional blue though that particular tractor never had a blue chassis originally some restored tractors have that)
– new rims made
– new hubs for front axle made
– optional front 3pt linkage and front pto made
Also the following configurations were added:
– different material/color configurations for cab, rims and fenders
– chassis material configuration
– engine configurations: default, chrome/open pipe, turbocharger(with visible turbocharger), turbocharger with intercooler (different air-filter outside gets visible)
– various wheel configs
– config for front 3pt and front 3pt with pto
Physics adjusted according to MoreRealistic calculations.
The doors and windows (incl. open/closing sounds) are animated.
If SimpleIC Mod is active (PC-Only) then MouseControl will automatically be deactivated and animations are via SimpleIC instead.