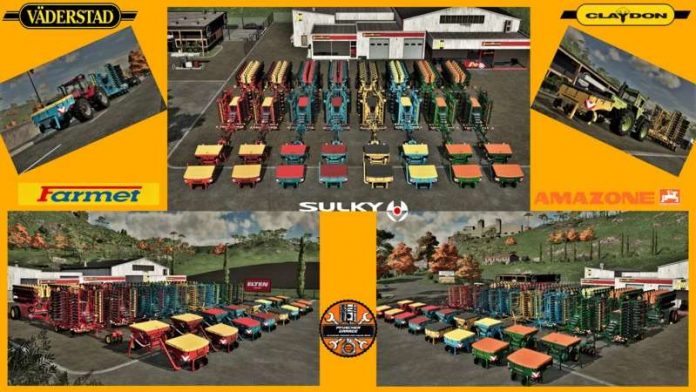 Tractor Pool Drilling Pack v3.0 FS22
What can the Drillen Pack ?
Version 3.0.0.0
Warning that appeared AFTER Patch 1.4.0.0 eliminated
Alles what a Drille or a single-grain Drille should be able as well as the front tanks
What is included in the pack everything ??
2 different front tanks .:
– originally the FH 2200 from Väderstad
– originally the TF 1512 from Kuhn
2 different drills.:
– originally the Rapid A800S from Väderstad
– originally the Tempo L16 from Väderstad
Both drills have the possibility to use a front tank, where it does not matter which of the 2 should be used .
On both drills were installed for this purpose “hoses or tubes” .
Furthermore, there is the possibility to configure different makes …
Furthermore, the Rapid is once WITH and once WITHOUT fertilizer function available in the store!
These are, among others, the following manufacturers:
Väderstad old or new varnish
Sulky old or new varnish
Amazone old or new varnish
Claydon as well as Farmet
Thanks to all testers as well as the Gloriouse Streamteam of Nastus1!