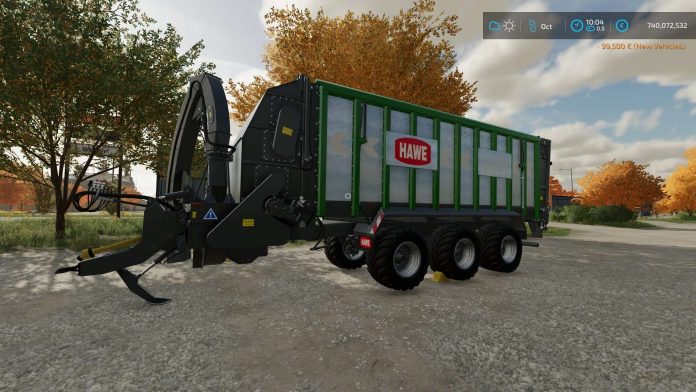 Hawe 250000 litre auger wagon v1.0 FS22
I saw someone had created a large auger wagon with a capacity of 200,000 liters, so decided I should try it. Personally, didn’t like it, but it was a good attempt, so I created my own version.
Pulled the Auger wagon straight from the game with Giants editor, then recoded the XML with some additional features:Large capacity – 1/4 million liters. Perfect for transporting sugar beet and large volumes of crops, hay, straw, silage for your animals, and/or biogas plant(s)Increased unload speed – Although not as quick as the mod I previously looked at, the unload speed is more realistic, with the back door unloading at 7500 liters per second and the pipe unloading at 1500 liters per second.
This is to help maximize what you retain from harvesting missions: what this trailer is designed for.Lighter trailer – Will stay on the road easier and will put less drag on your tractor, meaning faster take-offs and less fuel used (still weighs 5 tonnes though!)Lower power requirements – Reduced weight means reduced power requirements. Should now work with medium tractors as well as large (250Hp requirement).Reduced costs – Reduced purchase price, but still realistic. Reduced maintenance and painting costs, compatible with my repaint mod which lowers the repainting costs of all units.Multi-language support – As with all my Mods, they support German and French as well as English. Many other languages can be made available on request.
Happy harvesting and transporting!